We have 94 guests and no members online 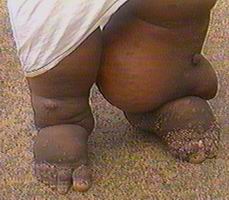 Filariasis
Filariasis is caused by a filarial worm which is a thread-like round worm inhabitiong the lymphatic system of humans. Mosquitoes are the main vectors of this disease. Distinct symptoms are the enormous enlargement of limbs or scrotum (elephantiasis) due to the obstruction of lymphatic vessels by the worm(s).

At present, another strain of bancroftian filariasis, found in immigrant workers from Myanmar, has been reported in Thailand. This strain can be transmitted by several kinds of mosquito vectors, including Culex sp., which are generally found around houses all over the country.

Life cycle
When a person is bitten by an infected mosquito, the infective larvae migrate from a mosquito's proboscis to human skin and penetrate the human body through the bite wound (1), and develop into adult worms in the lymphatic system (2). The incubation period is 3-9 months. Males and females mate and reproduce microfilariae, which are released into the bloodstream (3). A mosquito bites an infected person and is infected with microfilariae (4); then the microfilariae develop into the infective stage in the mosquito vector within 1-2 weeks (5).

Symptoms
Many infected persons do not develop clinical symptoms. The symptoms usually appear only when a person is repeatedly bitten by infected mosquitoes. The early signs are fever resulting from inflammation of lymph nodes/ducts in the areas of the armpits, groins or testes due to the presence of adult worm(s). The inflammation is remittent which stimulates the obstruction of the lymph ducts and causes swelling of the obstructed organ(s). If the confition persists, that organ is permanently enlarged and the skin becomes hard and rough.

Diagnosis
Those who live in endemic areas should have their blood examined for filarial parasites if there are signs of fever with lymphangitis accompanied by the enlargement of limbs or scrotum. In Thailand, microfilariae are mostly of the nocturnal type. Therefore, blood taken for examination should be drawn at night to provide the best result. Serodiagnosis is also available.

Prevention and control
Protecting oneself from being bitten by a mosquito vector,
- either by sleeping in a bed-net or screened bedroom,
- or by using mosquito repellent.

Controlling and reducing mosquito populations either by
- residual insecticide spraying,
- elimation of mosquito larvae in various habitats,
- and elimination of aquatic plants that are sources of resting for larvae.

Those who live in endemic areas should take chemoprophylaxis, such as diethylcarbamazine (DEC) which can be requested from local health offices of the Ministry of Public Health.

Info about vaccine, diseases and our recommendation
Location

Map of Thai Travel Clinic and direction
Visit our clinic

Answers to commonly asked questions in our clinic
Education